After a gruelling almost 24 hour bus journey, we have finally made it to Italy!

Due to Operation Stack at Folkestone, we were delayed two hours stuck in stationary traffic! I spoke to some really lovely people on the bus, however they were on the Active trip, whereas we were on the Adriatic, so it was a shame to see them go after building up the confidence to speak to them! I’ve never been on a coach for longer than 12 hours so this was a new experience for me, and let’s just say I slept awful! The chairs are so uncomfortable… So I was certainly glad to be in a proper bed the next night! The plus side of the journey was the stunning scenery when driving through Switzerland. As the bus kept moving, it was hard to take a decent photo! 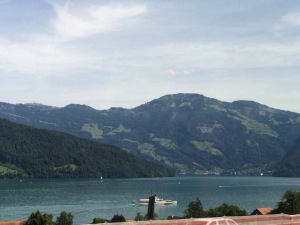 It’s boiling hot here, reaching temperatures of 30 degrees. We travelled with a group and everyone we’ve spoken to seems really friendly! It’s a church group, so they meet every morning and evening for prayers, which I respect but I do not go to church, so it means I can get some ‘alone time’!

We are staying on the Adriatic Coast, but haven’t been for a swim yet! The water is warm so I’ve been told! Our hotel is average but that was expected from the cheap cost, and I cannot believe how small our safe is? Seriously, how can I get my camera and iPad in there?!!

The first meal was interesting to say the least, we sat on a table with these two 15 year old boys, C and J, they were so nice! The hotel restaurant is very small, with splashes of yellow everywhere! I think it’s too visually distracting for someone like me! For starters we had this very chewy tomato pasta with a crepe/roll stuffed with this horrible cheesy fish flavour of some sort! Wasn’t very pleasant! Reminds me of when I went to Kenya about two/three years back, and we just had to eat whatever was put in front of us! For mains, it was a very fatty, chewy almost artificial type of beef, with potatoes, then fruit salad for dessert. It’s not me being fussy, but I think everyone found the food a bit off putting! Thankfully at the end of the meal, we got to choose what we wanted to eat the next evening!

The second day, was exploration day! While everyone was in the prayer meeting, F and I went to find the supermarket to buy some water. We went to the tourist information and I asked “where is the supermarket?”… The response I got was in German!! They obviously don’t speak a lot of English here, so thank God I knew what she was saying! Later on, back as a group we walked all way up to harbour from the hotel via the park! There were turtles swimming in the lake at the park! When we got to the harbour it was absolutely stunning, just as I expected from Italian beauty!

We had our first Italian pizza, which was delicious! When we got back to the hotel, F just told me that we had been walking for five and half hours in that heat! That explained my headache, although I drank plenty!

During the walk, I got to know more people in our group, from a very unique, eccentric man in his 60’s from Peru, to an Austrian woman who shared her love of sign language to me, which I thought was beautiful! There was this Scottish lady who seemed lovely, however I had a very hard time understanding her accent! F had to be my interpreter for most of the day, relaying back to me what people were saying! P from Peru.. Bless him, he keeps saying; “you alright?” like every 20 minutes! He has a habit of going into great detail when he’s talking, and the back of his legs were sun burnt so the leader had to put cream on for him!

After recovering from my headache, F wanted to go along to see what the evening prayer meeting was like because she loves joining in with the singing… Me being me, I can’t hear, I can’t sing, but I can daydream! It was on the terrace and we sat at the back on a sunbed, as all the chairs were taken. I kept moving backwards on the sunbed to get comfortable, and the next minute was pretty embarrasssing…

Everyone including F got up, and when she did, I fell completely backwards with the sunbed… Everyone turned around and stared at me, and F couldn’t stop laughing! Turns out you weren’t supposed to sit on that part….! After the meeting, a guy joked to me, “did you fall asleep or something?!” But I didn’t hear, so F relayed it and he then realised that I needed to lipread, and I really appreciated his efforts afterwards! However I feel that he might be over enunciating sometimes!! The view from the terrace was pretty cool though!

Dinner that evening was ten times better! I had this gorgeous, delicious creamy risotto with Parmesan as a starter. However I’ve started to realise their starter portion sizes are big enough to be main courses! I was stuffed after eating all the risotto, realising that I had to eat a roast chicken afterwards ugh!! The Austrian woman sat next to us, and she was showing me all these wonderful Austrian signs and then the ‘over enunciating’ guy kept trying to copy her to learn them, it was so funny! He asked how F and a I were friends, as we met in high school. He didn’t even know what high school was!? And he thought that you had to graduate high school… So C and J had to explain it all, and he still didn’t get it!! We were wondering if he was American if he kept getting all these ideas!

So far, a funny holiday, great experience and I’ll try and post again in the next few days!

Would love to hear your holiday experiences!

I’m E, aka Deafie Blogger. I’m an award winning blogger and activist and I'm profoundly deaf! I'm a proud Phonak hEARo and I love inspiring deaf people. Read more on the 'About Me' page. 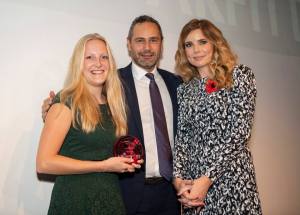 Listed as in number 5 in the Top 10 UK Deaf Blogs! http://blog.feedspot.com/deaf_blogs/

5 years of being a @phonak hEARo! 🦻💚
❗️Tips on how to communicate with face masks/face coverings❗️
Hope you’re all enjoying the lovely sunshine! ☀️ A little reminder to cherish every day as it comes.
This week is #MentalHealthAwarenessWeek and it’s all about #kindness - this beautiful bag arrived today and it’s the perfect message 🙌
🎥🌟NEW VIDEO!🌟🎥
💭🤔 Misconceptions 👂💬
Happy Deaf Awareness Week!
Through all the preparation for Deaf Awareness Week next week, I’ve been reflecting on last year’s theme of #RoleModels , the journey I’ve been on and how the online community has grown into a beautiful network of talented deaf and hearing loss individuals.
This #WellbeingWednesday it’s so important to look after our own health and well-being, staying positive during these uncertain times